By newsroom on September 3, 2015Comments Off on Too many & irrelevant updates are main sources of frustration on social media 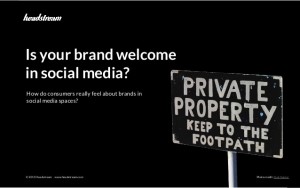 A recently released research has revealed that many brands still have yet to work out the best way to share content on social media channels.

The number one cause of frustration was too many updates (chosen by 29% of UK adults), with a similar third of consumers (27%) citing social updates that were clearly irrelevant and not personalised to them.

Just over a quarter (28%) said that they were unhappy when brands’ social media updates were ‘too sales-y’ with a heavy focus on products. And despite the popularity of competitions and promotions among businesses using social networks, 20% of consumers were annoyed by content, such as competitions, that they considered ‘too trivial’. In fact, this was the most common cause of frustration among millennial consumers aged 18-24 and 25-34 (with 34% and 31%, respectively).

Managing director Steve Sponder notes: “Given that many brands spend so much time and effort on their social media strategies, there are still gaps when it comes to effective targeting and personalisation – plus there are some companies that still unwisely seem to favour quantity over quality. What’s really interesting is that millennials don’t want their social feeds clogged up with brand content that they deem too trivial, which includes irrelevant competitions. What they want is something with more emotional punch, which is why more and more brands should be looking towards storytelling-based strategies.”

The report also found that Facebook is the social network people feel most comfortable with when engaging with a brand – over half (56%) favour it. Twitter was second with 24% of the vote, followed by Instagram on 17% and YouTube on 16%.

Facebook is also the favoured social channel for brand interaction among those aged 18-24 (with 46%), again with Twitter second, although unsurprisingly the number who feel comfortable when engaging on other platforms like Tumblr and Snapchat is significantly higher than with other age groups.

Steve Sponder adds: “Brands that succeed on social media know where to find the right audiences as well as the right conversations. These platforms can form an essential part of a broader content strategy, but it’s about far more than generating likes and followers. Some of the most effective social updates involve both stories and advocacy from fellow consumers.”

Too many & irrelevant updates are main sources of frustration on social media added by newsroom on September 3, 2015
View all posts by newsroom →