By newsroom on March 2, 2016Comments Off on View Music From Every Angle with Honda’s 360-degree Experience

In this recent spot for the new 2016 Honda Civic directed by Ray Tintori, the fresh musical stylings of Moses Sumney are brought to life in a 360-degree viewing experience.

Set in a stark industrial warehouse, the Los Angeles-based musician freely improvises, dancing in the background, providing harmonizing vocals in the foreground, and tapping the 2016 Civic percussively in between. 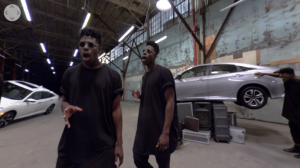 For this soulful folk song ‘Everlasting Sigh,’ he looped live vocals and sounds in real time, which is accompanied by a hypnotic visual experience that features many Moses Sumney’s. Every time Moses records a loop, the video of him recording that audio stays in the space, looping as well, or dropping out when the track drops out.

This experience by Creative Agency RPA, can be viewed as a 360-degree video on a web browser, or as an immersive virtual reality experience on a VR headset. These multiple platforms effectively allow viewers to take in music from every angle, following the musician around the room as he performs, showcasing the car’s sleek exterior styling.

View Music From Every Angle with Honda’s 360-degree Experience added by newsroom on March 2, 2016
View all posts by newsroom →