By newsroom on May 9, 2013Comments Off on Waitrose signs three-year sponsorship deal with the England & Wales Cricket Board 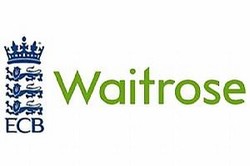 Supermarket chain Waitrose is to become the new Team Sponsor of England Cricket after signing a three-year deal with the England & Wales Cricket Board.

From next year the Waitrose logo will feature on all England teams playing and training wear starting with the Investec Test Series against Sri Lanka in May 2014 through to the tour of South Africa in 2016.

Under the agreement Waitrose will inherit a range of rights and assets including advertising in international cricket grounds, team image rights, ticketing, hospitality and access to England players for both commercial and marketing purposes.

“We are delighted to welcome Waitrose as the new sole sponsor of our England teams. The organisation begins their relationship with the sport with one of our marquee partnerships. The partnership will allow us to engage further with a mass, family audience which will inevitably help us achieve our aim of inspiring the nation to play, attend and follow more cricket,” commented ECB chief executive David Collier.

ECB commercial director John Perera added: “This partnership is especially pleasing for us as we welcome another high profile, high-street brand into our ever-expanding commercial partner family. I would like to take this opportunity to express our gratitude to Brit who has been an excellent and valued partner of the ECB since 2010, and will remain as Team Sponsor until April 2014.”

Of the deal, Waitrose managing director, Mark Price, said: “We currently export our products to a quarter of the world’s countries and associating Waitrose with this great national and international sport will enable us to build our brand globally.”

Waitrose’s marketing director Rupert Thomas continued: “We look forward to developing this exciting relationship and bringing benefits to our customers, the Partners who work at Waitrose and the wider community.”

A community and recreational project for the sport is also included with the sponsorship deal, details of which are to be revealed at a later date.

The food shops of the John Lewis Partnership has also confirmed it is to extend its sponsorship of Reading Football Club until the end of the 2014/15 season. Waitrose’s name will remain on the team’s home and away kits with special offers available for season ticket holders. Commercial director at Reading FC, Pat Coyne, said the club were “delighted” by the extension.

Waitrose signs three-year sponsorship deal with the England & Wales Cricket Board added by newsroom on May 9, 2013
View all posts by newsroom →