By newsroom on November 16, 2017Comments Off on From Insight to Action: A Wrap-up of Creativebrief’s BITE Live 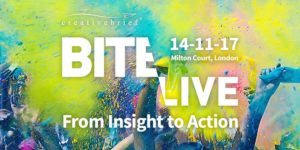 On November 14, MarComm News attended Creativebrief’s BITE Live event in London. The main theme of the day was going from insight to action and transforming the richness of ideas into real business value.

BITE Live invited some of the world’s leading brands and their agency partners to reveal how they have turned cultural and societal insights into the most creative and effective campaigns of the year. This is how the day progressed: 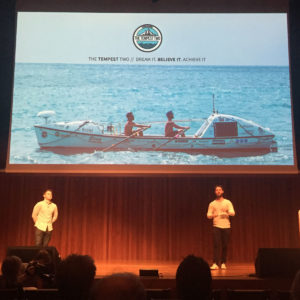 Following a brief introduction fromÂ Creativebrief’sÂ Managing Director Charlie Carpenter, the day kicked off with what turned out to be our favourite talk of the event! James Whittle and Tom Caulfield from The Tempest Two, told us about their awe inspiring and amazing story of rowing across the Atlantic.

In just 18 months the duo physically trained, raised Â£80,000 via cold emailing, and then with little to no prior rowing experience, set off on their 3,000 mile journey across the Atlantic. They displayed their ‘I Can’ attitude and showed how an idea between two friends turned into a creative brand adventure.

James and Tom have since quit their jobs and dedicated all their time (much to the dismay of their girlfriends) to The Tempest Two, where they are changing how brands use content by showing their customers that anything is possible.

This talk was incredibly inspiring and a great start to the day. When asked to explain what The Tempest Two wanted the audience to take away from their presentation, they said they wanted people to knowÂ “they are capable of anything they want to achieve but its having the mind shift to recognise that and commit to something.” 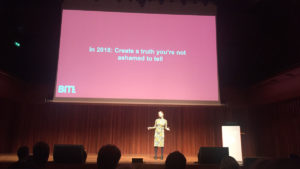 The Tempest Two’s whirlwind of a talk was followed byÂ the Managing Editor ofÂ BITE,Â Kara Melchers, whoÂ explored the main themes from 2017 and what they mean for the year ahead. Her key trends of 2018 were as follows: 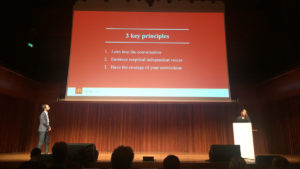 Kara’s final trend was all about creating a truth that the brand is not ashamed to tell, which perfectly segued into the next talk byÂ McDonald’sÂ VP of MarketingÂ Emily Somers andÂ Leo Burnett London’sÂ Global CSO,Â Josh Bullmore – who spoke about howÂ McDonald’s debunked the myths and misinformation surrounding their food.

They spoke about the Age of Misinformation, the anatomy of fake news, and told the story of how they placed the brand’s worst fears at the heart of their advertising. This presentation was particularly interesting because it was extremely relevant to the fake news epidemic the world is facing. 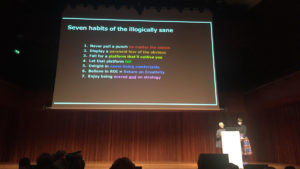 The next talk was another agency-client duo ofÂ Kemi Anthony (IKEA) andÂ Katie MacKay (Mother London), who presented the conception of theirÂ ‘The Wonderful Everyday’ campaign.

Kemi and Katie revealed how IKEA built a brand for ‘The Wonderful Everyday’ by focusing on the long term health of the brand and creating a platform that combines the brand’s core beliefs and values in order to generate brand love and commercial growth.

This talk further highlighted the importance ofÂ building a long term brand,Â which will stick with consumers as a business in the long run.

Some of the main themes from the morning’s speakers included taking action, realising your potential, making the truth interesting, embracing the skeptical voices, developing an idea that will outlive you, and having the courage of your own convictions. 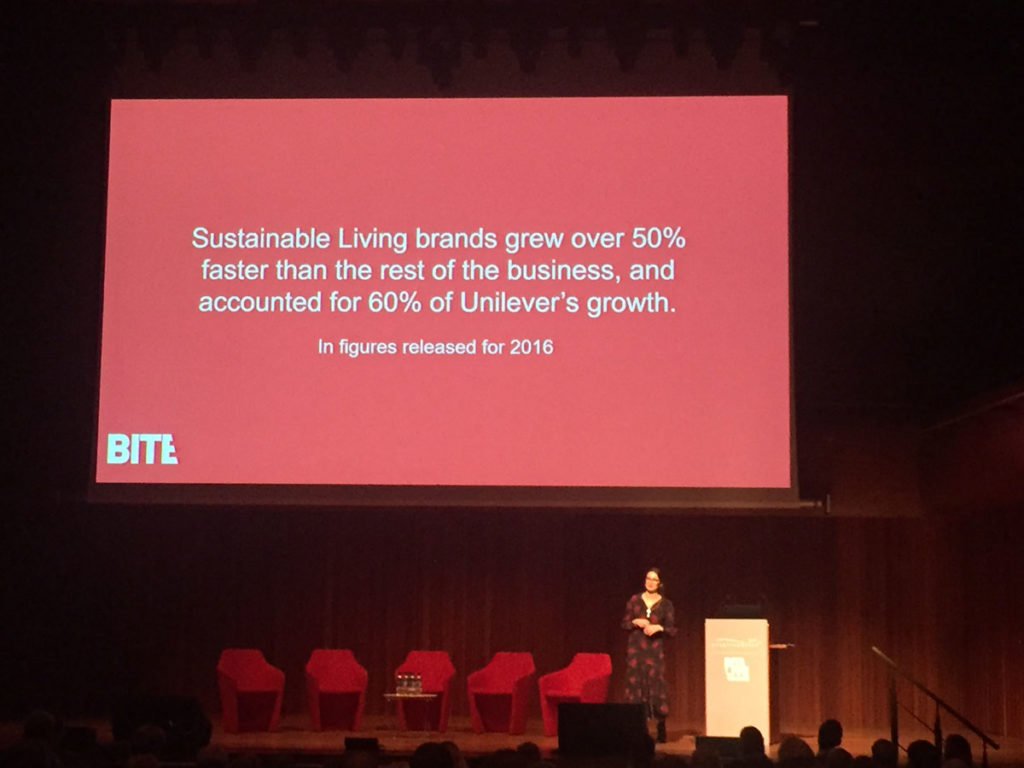 BITE’s Izzy Ashton moved the conversation forward by highlighting the importance of creating a higher purpose for your brand and being responsible for your actions and behaviours, in order to move the needle.

Then we heard from Lucy Abel at StoneWall andÂ Mr. President’s Laura Jordan. The duo talked about equality and LGBT rights through launching a three year campaign to inspire, educate, and energise a passive section of the community, encouraging them to take more meaningful action on LGBT rights in their everyday lives. 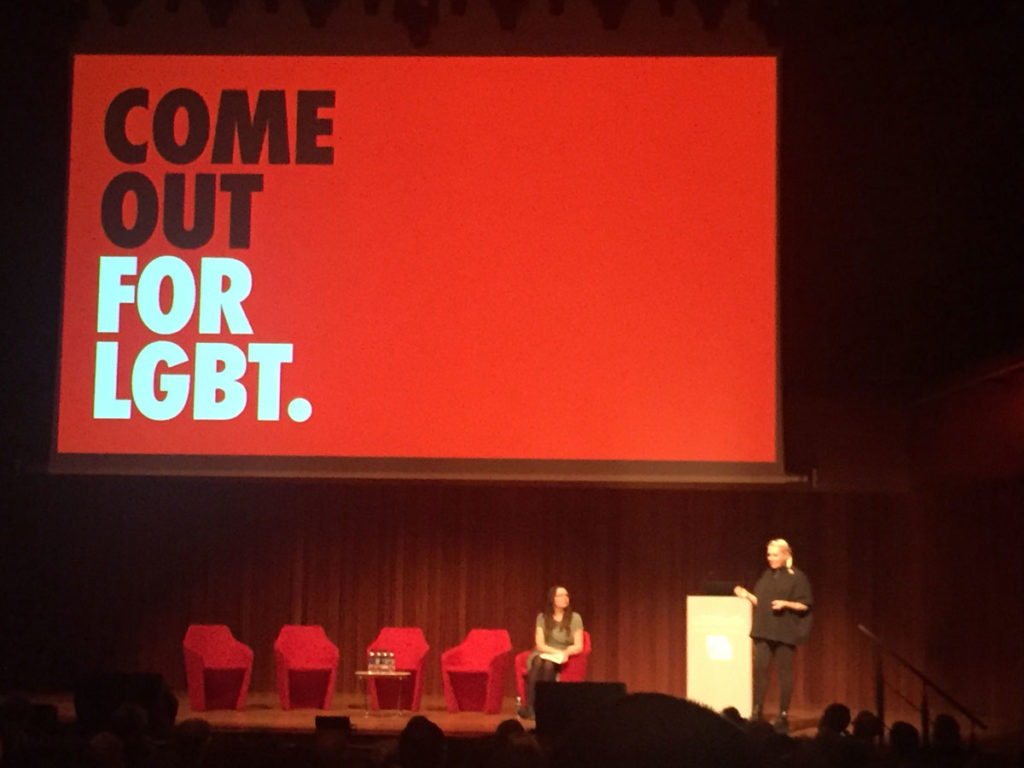 Commander of the Most Excellent Order of the British Empire,Â Jude Kelly followed this by asking why gender equality takes so long to achieve and what this means for our industry and beyond. She explained that it takes courage to be an activist, but that real change is possible through a positive, optimistic movement.

These two talks were particularly relevant to today’s society as they touched upon subjects that are difficult to talk about. Â Jude, Lucy, and Laura are all pushing the envelope and encouraging change in these areas via their Women of the World (WOW) initiative and the ‘Come out for LGBT‘ campaign respectively.

@zaidalzaidy We all have our own biases, but if we accept differences and align we can start to have a conversation and move forward with diversity #BITELIVE

.@mitchyov on being a pacemaker rather than a role model when it comes to diversity: “I can do things that keeps up the pace and momentum on diversity and hopefully others will go on and do more” #bitelive

Following lunch, we were welcomed back by a quick audio clip recapping theÂ history of voice. This was a precursor toÂ J. Walter Thompsonâ€™s The Innovation GroupÂ andÂ MindshareÂ who presented the key finding of theirÂ Speak Easy: The rise of the voice-activated world, study.

â€œThereâ€™s a tendency when you interact with a voice that you project a personality onto it.â€ @JezP76 from @mindshare_uk on our emotional response to Alexa #BITELIVE pic.twitter.com/3y3wvaT2dX

Fascinating insights from #speakeasy2017 If the past few years have been all about #mobile, 2018 is going to be all about #voice @creativebrief #BITELIVE pic.twitter.com/VGs8tkrW80

Next, we listened toÂ Nick AdamsÂ at SenseÂ andÂ The Economist’sÂ Marina HaydnÂ discuss how they built an always-on campaign, which led to thousands of new users with a lifetime value of millions and ushered in a new internal department, just by selling less.

Their presentation affirmed how you canâ€™t go wrong by focussing on whatâ€™s interesting about your brand, even if that might be daunting.

They even brought along some of their ‘bug ice-cream’ for the audience to try, in order to prove their point!

Give Peas a Chance

The penultimate talk was entitledÂ Hippeas: From Idea to Global Brand, which had the brand’s founderÂ Livio Bisterzo share how the snack went from concept to shelves in a whopping eight months!

Alongside James Nixon, Managing Director of Jones Knowles Ritchie, this session showed that a great brand identity, clear purpose and a strong focus on doing good can transform an idea into the global marketplace.

The final keynote of the day came from Alain de Botton, best selling author and philosopher,Â who discussed the future of capitalism and the philosophy of everyday life. This talk was a great way to end the day because it wrapped up all the topics that were discussed over the course of the event.

“At the end of the day, we can’t commercialise relationships and happiness, instead we have to place profit higher up the pyramid and create a brand purpose that is glued to these values. This is turn will create a new kind of entrepreneurial spirit and hopefully produce national wealth,” said Alain during his talk.

The afternoon sessions were extremely engaging and informative. We learned about easing the cognitive load and finding your voice from Mindshare and The Innovation Group, being broad minded and globally curious while facing discomfort and polarisation from Sense and The Economist. Â We also learned about thinking big and doing good through vision and vitality from Hippeas and Jones Knowles Richie and the future of capitalism from Alain de Botton.

Overall, attending BITE Live was a meaningful and inspiring experience. Our main take aways from the day include making the truth interesting, changing culture through stories, and pushing yourself to be more daring both in business and in your personal lives.

@Amelia_Torodeâ€™s closing remarks & take away from the event 1. In a world of misinformation itâ€™s imperative to make the truth interesting 2. We can change culture through stories – both product and people stories 3. Donâ€™t think about role models. Think about pace makers #BITELIVE pic.twitter.com/eTRlxnU9Ed

What a brilliant inspirational day @creativebrief & a tremendous swag bag, thanks. #BITELIVE

A stonkingly good day at #BiteLive. Much to noodle on.
Thank you to the organisers; a really well put together event.

Pacemakers, storytelling and the future of capitalism. Heady stuff at #bitelive with @creativebrief and @alaindebotton pic.twitter.com/IFfSe5RLcI

From Insight to Action: A Wrap-up of Creativebrief’s BITE Live added by newsroom on November 16, 2017
View all posts by newsroom →