By newsroom on July 11, 2017Comments Off on Häagen-Dazs Returns to SW19 with a Playful Twist on a Wimbledon Classic in its New ‘Extraordinary Serve’ Push

Häagen-Dazs is bringing a touch of the extraordinary to the UK’s most iconic tennis tournament. In its second year as one of just 13 handpicked official suppliers of The Championships, Wimbledon, Häagen-Dazs announced its playful new ‘Extraordinary Serve’ campaign backed with a £2m investment. 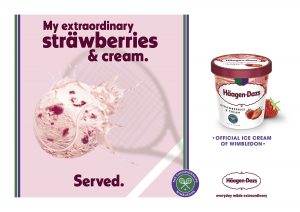 Häagen-Dazs’ ambition in 2017 is to make the UK dream about and crave the ‘Häagen-Dazs Strawberries & Cream ice cream’ as the treat they desire during The Championships and enjoy the extraordinary new taste served up to the nation.

Serving up a major TV burst with a bespoke tennis-themed spot, as well as a high-reach social media push on Facebook & Instagram, the campaign will also feature a large-scale micro influencer outreach to ensure that Häagen-Dazs Strawberries & Cream becomes the ‘extraordinary serve’ that is all the talk during the Wimbledon Fortnight.

Adding another twist to the iconic summer pairing, Häagen-Dazs is bringing back its hugely popular Strawberries & Cream ice cream bar. Building on the Scandinavian-inspired heritage of its name, Häagen-Dazs has partnered with Swedish sports fashion brand Björn Borg, renowned for its iconic tennis heritage, to create a limited-edition design in a true celebration of the summer of tennis. With its rich signature Belgian chocolate coating and the much-loved taste and texture of the Häagen-Dazs Strawberries & Cream on the inside, this truly is summer on a stick! 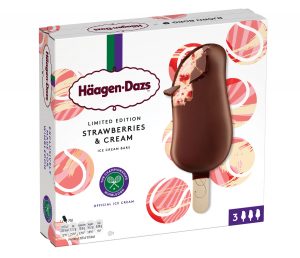 Experiential initiatives in and around SW19 include a takeover of the Southfields Underground with a co-branded Championships strawberries & cream theme for an extraordinary arrival experience. In addition, special creations like the ‘Strawberries & Cream Serve’ and ‘Strawberries and Cream Sundaes’ served up at the Häagen-Dazs parlours at the All England Club to bring the flavour pairing story alive for spectators at the grounds.

However, the fun is not limited to SW19. Bringing the ‘Taste of Wimbledon’ to tennis fans across the country, Häagen Dazs will send ball boys and ball girls to five different cities to surprise a select few by delivering an extraordinary serve of Strawberries & Cream ice cream to each city. The activity will be supported on Facebook so people know to look out for them. The taste of tennis delivered to the nation in style!

The campaign began on 28 June and will run until 16 July, encompassing the prime tennis season in the UK.

Arjoon Bose, UK and Northern Europe Marketing Lead for Häagen-Dazs, said: “Wimbledon is one of our most important cultural apertures as a brand. We are thrilled to be a returning partner following a highly successful debut at The Championships. This year, we are creating what is the ultimate playful twist on the much-loved classic strawberries and cream signature flavour pairing of The Championships. By heroing Strawberries & Cream ice cream, the Extraordinary Serve campaign lets us deliver a modern expression of this Wimbledon icon. This will be a significant investment for the brand across major touchpoints and we are sure it will have both strong resonance and relevance to kick start our summer season.”

Häagen-Dazs Returns to SW19 with a Playful Twist on a Wimbledon Classic in its New ‘Extraordinary Serve’ Push added by newsroom on July 11, 2017
View all posts by newsroom →