By newsroom on October 1, 2013Comments Off on Nicolites launches Swaptober campaign to coincide with Stoptober month 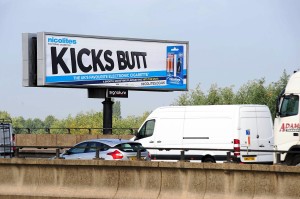 The campaign cost just under £500,000 and will feature on more than 1,000 billboards throughout the UK as well as advertising space at London’s Euston train station and Waterloo Station.

Nikhil Nathwani, managing director, said: “Our on swaptober campaign coincides with the government’s Stoptober campaign and we anticipate than tens of thousands of smokers will consider swapping to e-cigarettes rather than stopping completely – hence our message ‘Can’t Stop? Just Swap’.”

Buses and taxis will also display adverts and the outdoor activity will be supported by an eight-week national radio campaign.

Nicolites launches Swaptober campaign to coincide with Stoptober month added by newsroom on October 1, 2013
View all posts by newsroom →