By newsroom on September 9, 2015Comments Off on O2 sets itself up as the brand behind the English Rugby team’s success with animated ad

O2’s marketing director Nina Bibby says she wants to create a “movement” with the activity and be seen as the brand powering the support for England’s Rugby team during the World Cup.

The goal to be seen as the brand helping England to success at the Rugby World Cup began in earnest earlier this year with the creation of the #WeartheRose tag which was used across social media and digital billboards to seed the idea of coming together to support the team.

It has built since then with shirt giveaways, a virtual reality experience that gave fans the chance to feel like a player, and a complete rebranding of O2’s retail stores to feature the rose in its sign.

The crest of the wave comes in the shape of an animated film calling on the nation physically or virtually ‘Wear the Rose’ and aims to articulate that with each individual’s support the team collectively stands taller. 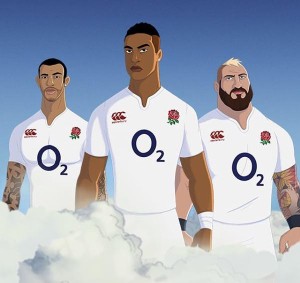 The insight behind the work came from England Rugby coach Stuart Lancaster, who believes the power of support can help a team deliver an extra 10 per cent in its performance.

“The Rugby World Cup presented us with another one of those Olympic moments when the nation comes together,” she explained. “We’re here with Stuart and the team on their quest to win the world cup on home soil; it’s a fantastic opportunity.”

Breaking across social media September 9, the film will then run on TV and cinema over the coming months. An out-of-home push has come in the form of an Oxford Circus underground tunnel wrap as well as an exclusive advert on the bus shelter in Coronation Street for six weeks.

Meanwhile a partnership with The Sun will see O2 hand out two million posters to fans.

To “capture” all of the support O2 has created a totalizer which will display how many people have interacted with the activity. That totaliser is to be streamed live into the England training camp in order to show the team and Lancaster how many people are behind them.

“Through this we are aspiring to go beyond our category,” said Bibby. “We want to have a broader dialogue with our customers beyond mobile phones. It’s about taping into their passions and connect them to something that’s bigger.”

The creative direction of the ad is part of a two-pronged strategy; chiefly to make it as inclusive as possible but also to set O2 up to be reactive throughout the tournament.

“As things happen we can create content and put it out there ourselves. We’re not reliant on capturing footage or the actual players. So animation has enabled us to be much more nimble and agile,” said Bibby.

“With sports it is all about what’s happening in the moment and if it’s about getting people to participate you want to encourage those conversations; that means doing it In real-time,” said Bibby.

O2 sets itself up as the brand behind the English Rugby team’s success with animated ad added by newsroom on September 9, 2015
View all posts by newsroom →