By newsroom on March 2, 2016Comments Off on Sky targets commuters with contextual ads in programmatic Sky Q campaign 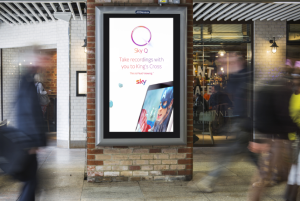 Sky has launched a UK-wide digital out of home (DOOH) advertising campaign to support the launch of its new wireless home entertainment service Sky Q.

The campaign will target commuters along popular routes with contextual messages that will be programmatically delivered.

Using location and audience mapping data the ad campaign mirrors Sky Q’s message of ‘Take it With You’ and will contextualise the creative according to the location, time of day and the route people are traveling.

The DOOH campaign was planned and booked by Rapport and MediaCom while the creative was handled by Brothers & Sisters. It launched February 29 and will be delivered across JCDecaux, Ocean, Primesight, Clear Channel, Signature and Exterion networks.