By newsroom on July 14, 2017Comments Off on Head & Shoulders makes recyclable shampoo bottles out of beach plastic

At the Davos World Economic Forum in 2016, the Ellen MacArthur Foundation announced that in terms of weight there will be more plastic in the ocean than fish by 2050. Shocked by this statistic,Head & Shoulders announced its commitment to use recycled plastic at the very heart of its production process.

As strategic, creative and production partners on the project, Saatchi & Saatchi London worked with Head & Shoulders to develop the campaign to launch the world’s first recyclable shampoo bottle made from plastic collected on beaches. Also partnering alongside Head & Shoulders global PR agency, MMK+ Ketchum, and recycling partners Suez and Terracycle, they made the sustainability project a reality. Hailed as a technological breakthrough, the project was announced this year at the World Economic Forum in Davos. 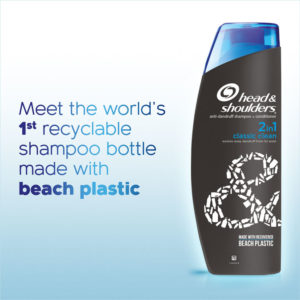 Working with over 100 NGO’s and 1000 volunteers the project focused initially by sourcing the plastic for the bottles. All over Europe, volunteers collected waste beach plastic from their local beaches which Head & Shoulders then processed with their recycling partners to produce 170,000 bottles. A limited-edition recyclable shampoo bottle was created which went on sale exclusively in Carrefour stores throughout France in June. Aiming to help raise people’s awareness about recycling plastic waste, the campaign was launched alongside a French consumer study that highlighted the practice and impact of recycling in the bathroom.

Co-developing the sustainability strategy to drive the plastic recycling agenda, Saatchi & Saatchi London developed a launch plan for the kick-off phase. Helping to launch the partnership with Carrefour, they created assets for global deployment including a launch video depicting the sustainability project alongside animated social posts, articles, infographics, print ads, other retailer and ecommerce assets for Carrefour. An online documentary will also be released in the coming weeks.

Vice President of Head & Shoulders and Global Hair Care, Lisa Jennings explains: “At Head & Shoulders, like our partners TerraCycle, SUEZ and Carrefour, we strongly believe that we have a role to play in the better use of resources. Designing this bottle with 25% beach plastic is proof that plastic waste can have a circular life.”

Chief Operating Officer of P&G at Saatchi & Saatchi, Carol Miller-Repetto, added, “Partnering with P&G to co-develop the beach plastic sustainability strategy for H&S has been an amazing challenge and opportunity. Plastic waste in the oceans is a global problem, and we relished the opportunity to use our close partnership with P&G to do good for the environment at scale.”

Procter & Gamble is committed to a long-term vision that will encompass all its business activities. As the world’s #1 Hair Care Company, approximately half a billion bottles every year will include up to 25% post-consumer recycled content by the end of 2018. This represents 99% of all the hair care bottles sold in Europe across P&G’s entire hair care portfolio of brands like Pantene and Head & Shoulders. They are also looking to expand their beach plastic recycling programme and other recycling programmes across other countries.

Head & Shoulders makes recyclable shampoo bottles out of beach plastic added by newsroom on July 14, 2017
View all posts by newsroom →