By newsroom on July 27, 2017Comments Off on New Balance launch new campaign to celebrate the arrival of Furon 3.0 football boot

New Balance Football launched an integrated campaign titled ‘Dictate the Play, Devastate the Defence’ to mark the arrival of the new Furon 3.0 football boot and a new colour-up for the Visaro boot silo.

Created in conjunction with ZAK, New Balance Football’s global creative agency, the campaign will roll out globally, featuring in retail and going live across outdoor, print, social and digital channels.  The campaign is aimed at a core audience of 17 to 24-year-old football obsessed players.

The campaign centers on a series of video challenges including the ‘Devastate Time Trial’ and ‘Devastate Extreme Volley’ where New Balance’s Furon pros, Jesus Navas and Kevin Mirallas challenge fans to test their skills and see if they have what it takes to beat them.  Both challenges are inspired by the boot’s unique properties: blazing acceleration and devastating strike accuracy.

Additional elements of the campaign showcase the technical evolution of the footwear collection with a hi-definition tech video and stunning campaign photography accompanied by the campaign lines ‘Dictate the Play’ and ‘Devastate the Defence’. 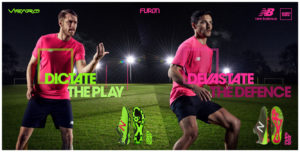 Kenny McCallum, Global Senior Marketing Manager – Football at New Balance commented: “This is an evolution of the Furon football boot collection and the campaign illustrates the impact our cutting-edge technology has on the players and the game. ‘Dictate the Play’ and ‘Devastate the Defence’ encapsulate the attitudes attacking players have when they put on boots that have been designed specifically for explosive forwards or imposing midfielders. ”

Matt Bennett, Chief Creative Officer at ZAK added: “With this campaign, we really wanted to bring to the fore the psychological benefits that great boot design can have on a player. The campaign delivers a strong message about the boot benefits for attacking players which will really resonate with the target market.  We’re looking forward to rolling out this integrated global campaign with New Balance and seeing the response from consumers.”

New Balance launch new campaign to celebrate the arrival of Furon 3.0 football boot added by newsroom on July 27, 2017
View all posts by newsroom →