By newsroom on October 16, 2018Comments Off on The Truth Report 2018 shows TV essential in securing customer loyalty for retailers 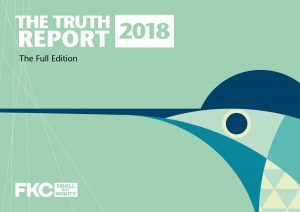 The old adage that Christmas brings ‘goodwill to all men’ may chime more than jingle bells with UK retailers as new research reveals television advertising has been voted by UK consumers as the most persuasive medium for encouraging greater brand love and loyalty, above channels including social media, radio, newspapers and Google ads.

With the ‘battle of the brands’ Christmas TV adverts launching within weeks, John Lewis’ reported £10 million investment in this year’s partnership with Elton John could prove a sound investment for the beleaguered retailer.

The Truth Report 2018: The Trouble with Real People conducted by strategic advertising agency FKC surveyed over 2,000 consumers on their response to brand loyalty. It found that that terrestrial and broadband TV is key to helping retailers boost consumer loyalty, with over half (50.4 per cent) of all shoppers voting it as the platform they are most likely to respond positively to, followed by on pack messaging (46 per cent), Facebook (43 per cent) and YouTube (43 per cent) .

In the era of fake news, TV was also found to be the most trustworthy platform to receive brand messages, receiving double the amount of votes than any other channel, with one in five consumers (22 per cent) voting it the most credible platform, followed by in-store messaging (11 per cent) and Facebook (10 per cent).

The research also found that despite conventional wisdom, multi-channel or device use whilst viewing and using preferred platforms doesn’t impact on the consumer experience. Almost a third (29 per cent) of consumers said their experience of a preferred platform was enhanced when using another device, with 44 per cent saying it stayed the same and only 27 per cent saying it was reduced.

The research, which spanned 18 major sectors including food & drink, mother & baby, fashion, automotive, beauty, and travel, saw travel brands (including airlines, hotels, tour operators and holiday destinations) suffer most in the ‘lack of brand loyalty list’, with an average 40 per cent of consumers saying they struggle to remain committed to specific brands in the sector. This was closely followed by department stores – a fact played out in the recent problems experience by House of Fraser, John Lewis & Debenhams – with 33 per cent of consumers saying they find it difficult to remain committed, citing infrequent or irrelevant brand communication as the reason.

When asked to name a favourite brand, Amazon topped the league – but with just 5.5% of consumer votes. Debenhams received just one per cent of the vote, with John Lewis rounding out the Top 20 brands with just under one per cent.

Stephen Fox, Chairman at FKC commented: “Our research has shown that the heady, halcyon days of unquestioning consumer loyalty are long gone. The sea of consumer choice has diluted customer commitment to brands – even to companies like Amazon. The research validates that we find it easier to be loyal to brands that we either use or connect with every day, so the big challenge is how can retailers increase loyalty when they are not always on our minds.”

FKC’s top three tips for promoting greater brand engagement as determined by the research finding are:

The Truth Report 2018 shows TV essential in securing customer loyalty for retailers added by newsroom on October 16, 2018
View all posts by newsroom →